Blog post: The truth about health supplements: What works?

Blog post: The truth about health supplements: What works?

Following on from last weeks post regarding health supplements, who should use them and who should avoid them, I thought I would compile a short list of my go to health/performance aids and give you an idea of why I use them. Some of these aren’t really ‘supplements’ but are things a lot of people could benefit from in their diets.

Whey protein is made as a by product of cheese production which is why some people class it as a food stuff. I tend to agree here although I still believe that it should only be used to supplement the diet. It is convenient, tasty and can be cooked with or used as an ingredient in health shakes or, the way I use it, as part of a delicious post workout treat (I’ll give you the recipe in just a minute). It is an easy way to get your average protein intake up over the course of the day, however it should not be used as your primary protein source as real, single ingredient food will always triumph in terms of satiation and diversity.

This has a good protein:carb ratio to optimally refuel depleted glycogen stores after an intense training session.

The Omega fatty acids are classed as essential and cannot be synthesised by our bodies. This means we must obtain them through our diets. Western diets are typically low in Omega 3 and high in Omega 6 due to the amount of non-grass fed animals, grains and processed vegetable oils that they include. We need to balance the ratios to no more than 1:5 for Omega 3:6, anything higher can cause chronic inflammation in the body which is perfect territory for disease to manifest itself. We can get a good amount of Omega 3 into our diets through oily fish, grass fed animals, flax seeds, omega rich eggs and walnuts. Even so, to ensure an optimal balance I supplement with sustainably sourced Omega 3 tablets (the liquid is rank). I use Genetics Supplements Omega 3 Fish Oils which are reasonably priced and low in heavy metal content.

Creatine is the only supplement that has been proven to work 100%. There are literally hundreds of studies to back this up but there are still some people who refuse to use it as they believe it is dangerous for some reason. There are others who are supposed non-responders but for 95% of the population it will work. It works by drawing water into the muscle tissue, increasing hydration and nutrient delivery. It also increases our capacity for short, intense bursts of exercise by ensuring we have enough reserves of creatine phosphate to replenish ATP (Adenosine Tri-Phosphate) which is our bodies preferred energy source for maximal effort exercise. This can lead to increased muscle mass due to increased volume of training and increased strength. Only shoot for creatine monohydrate (Creapure) as low quality creatine comes bound to sodium which can cause cramping in the muscles by causing electrolyte imbalances.

Magnesium should be a staple in most active persons diets as it can easily become depleted through intense exercise. It can also be quite difficult to get adequate amounts through the diet if you are training hard. Hypo-magnesia is common in prolonged, strenuous exercise such as that performed by endurance athletes. Magnesium is responsible for improving performance through sleep quality and nervous system repair. It also serves as a physiological regulator, keeping cell membrane stability. Magnesium supplementation can be taken in pill form, trans-dermally (try Trans-Dermal Technology out) or via an Epsom salt bath.

Again not really a supplement but boy is this stuff great. It is mostly made up of saturated fat which means it is ideal for cooking at high temperatures with. It is full of Medium Chain Triglyceride’s (MCT’s) that can be broken down by the liver and used for energy much faster than Longer Chain Triglyceride’s found in things like olive oil. It is very calorie dense though so use sparingly, especially if trying to lose weight.

This is a relatively new supplement that is getting some very positive research behind it. It is best suited for people involved in high intensity intermittent sports (Muay Thai, MMA or boxing) due to its lactate buffering effect. It doesn’t need to be taken around your workouts and in fact is better loaded up like creatine over a longer period of time until it saturates your muscles. Supplementing on its own with around 1.5g twice per day with meals is enough to saturate your muscles in 3-4 weeks. It has a great cost:benefit ratio for those really looking to push the boundaries. 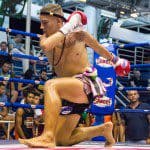