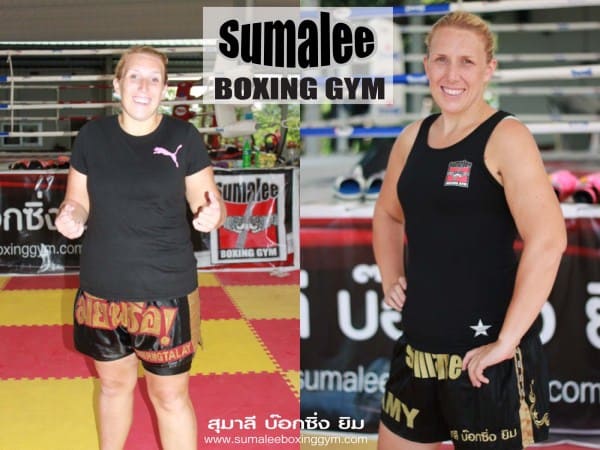 Amy Sharp is Head of Nursery at one of the biggest International schools in Phuket.  When she came to Phuket nearly four years ago she was around 120 kgs.  The weight had been piling on and she knew she had to do something about it.   She started training Muay Thai at Cherng Talay Muay Thai and lost an amazing 40 kgs within four months, ready for her first fight.  Although she beat her opponent, she knew she could do a lot better because she had fought a much smaller Thai.  This drove her to want to fight more and since then she has had 26 fights.  She has recorded 23 wins and has fought all of the well known ‘farangs’ in her weight class (75-80 kgs) training in Phuket over the last few years.  All of this she has achieved whilst holding down a full time job.  She has fought all over Southern Thailand and has fitted her training regime around her work, often getting up at 5.30 am in order to run to school in the morning.

Amy decided to come to train at Sumalee Boxing Gym three months ago after a six month break from fighting.  During this time the weight had started to creep on again and she was attracted to Sumalee because of the nutritional package offered at the gym.  She has followed the advice of a sports nutritionalist and this, together with her new tough training regime at Sumalee Boxing Gym, has helped her to lose approximately 10 kgs.  The nutritionalist has been able to give her detailed information regarding her body composition helping her to focus on her training and dietary goals.

Sumalee Boxing Gym is a different style of gym to what Amy has been used to and she has really enjoyed having more ‘farangs’ to train with and the broader range of service and facilities at the gym, especially the swimming pool.  She trained hard for her first fight for Sumalee Boxing Gym (see training video below) at Bangla Stadium.  This was an eagerly anticipated re-match fight with Tracey from Tiger Muay Thai which Amy went on to win on points (see fight video below).  Sumalee Boxing Gym is very pleased to welcome Amy who runs a MuayFit Class for Women at the gym on Tuesday and Thursday evenings.  This is a popular class attended by students at the gym and local ex-pats.