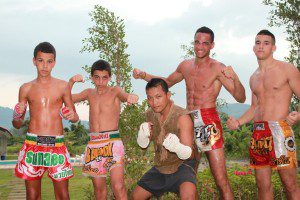 Ruddy Renaud, the Principal at the Body Fighting Club in Montpelier France, recently brought a team of young fighters for Muay Thai training at Sumalee Boxing Gym.  Ruddy first came to Thailand to train Muay Thai in 2008.  He met Oron (Deachkalon Sumalee) then and struck an instant affinity with him.  Since then Ruddy has trained in many gyms in Thailand but says that Oron is the only trainer for him.  He feels that the pacey style of Oron’s training technique is particularly suited to ‘Farangs’ competing in disciplines such as K1, Kick Boxing and Full Contact.

Ruddy himself has an impressive competition history.  He is a national French K1 Champion.  He was also the World Full Contact Champion in 2008.  This particular title gave him considerable accolade and he has over 200 students training at his gym.  He is also the Directeur of the National Federation of Kick Boxing.

The team visiting Sumalee Boxing Gym on this occasion included Thomas Fadel Silva who was recently the runner-up in the Free Fighting World Championship (72 kgs) held in November 2011.

The main objective of Ruddy’s trip to Thailand on this occasion was to secure practice fights for two youngest members of his team: Illiase Coeur de Bodyfighting (16 years old) and Hamiid Mhamdi (15 years old).  Illiase is a French Champion in Full Contact (45 kgs). Hammid was World Kickboxing Champion in 2010 (45 kgs) and the French K1 Champion in 2011. 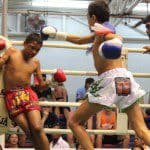 Iliase fought at Bangla Boxing Stadium on the 6th January against a Thai opponent and won with a kockout within seconds of the start of the first round.

Hamiid, who fought on the 8th January, had a tougher challenge with his opponent but still managed to achieve a knockout in the first round. Sumalee Boxing Gym is proud that such a prestigious team of fighters chose our gym as the place for these young fighters to prepare for their leap into full contact fighting.

The Body Fighting Club team were very impressed with the standard of training and facilities at Sumalee Boxing Gym and made good use of the swimming pool for relaxation between training.  The team took the all-inclusive package at the gym and particularly enjoyed the Thai food prepared by the trainers in the evening.  Ruddy and Thomas will be travelling back to Phuket in March and have committed themselves to fighting then too.

Far from the Madding Crowd in Koh Yao Noi