Sumalee Boxing Gym / Diet  / Making weight (3) for Muay Thai: All or Nothing

The week leading up to weigh in tends to be the most testing for Muay Thai fighters and making weight is an added stress. In Thailand training volume and intensity is kept relatively high until just 2 days before a weigh in and this combined with the challenge of dropping a sometimes significant amount of weight can take its toll on even the most seasoned of athletes. Inevitably something in the training or diet needs to be altered to elicit the required drop in weight. Most fighters are willing to go through the hardship of traditional cutting techniques to end up with a weight advantage over their opponent. By dropping weight to then refuel before fight day they can end up considerably heavier than what they weigh in at. The most favourable techniques for achieving this weight loss usually involve stripping the diet right back to a bare minimum, wearing a sweat suit and jogging in the heat or having lengthy sauna sessions in an attempt to shed water weight. All of these tactics have potentially dangerous consequences which is why using carbohydrate, sodium and water manipulation strategies can be so effective. By keeping the nak muay hydrated and fuelled for as long as possible we can offset any drop in performance during training as well as optimising their recovery as well as possible.

A big factor that that myself and Jordan had to account for was that he despises saunas. He would rather do a half marathon in a sweat suit than sit for 30 minutes in one. The alternatives we came up with would avoid both of these scenarios.

7 days before weigh in Jordan was sitting at 62.7kg, just under 6kg from his target weight of 57kg. Now was the time to put in to practice what we had lined out for him. Now, because we had started working together so close to his fight we had not had time for a trial run so it was very much a case of all or nothing. In theory it should all pan out fine, but that is all it was. Theory. By understanding the way carbohydrates are stored in the body and used for energy, how the body manages water and fluid balance and the way electrolytes can affect this, it becomes relatively easy to put in place certain measures that will get the results we want on the scales whilst keeping the fighter as healthy as possible. Inevitably, the closer to the weigh in we got the tougher it would get but Jordan is used to knuckling and down and doing what is required of him. 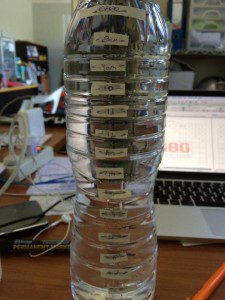 The one of the key weapons in our armoury was a technique called water loading. This is the process of dramatically increasing water intake to trick the body into expelling more and more fluids to maintain its hydration equilibrium, just one system of many which helps the body stay in homeostasis. Homeostasis is the term used to describe all of the systems in our bodies which help it maintain an even keel. It is important that these systems exist because having too much or too little water in our cells can be dangerous. The same way being too hot or too cold can be dangerous and so too having to much or too little glucose in our blood. There are systems in place which attempt to bring the body into its comfort zone. When we increase water intake significantly the body lowers its output of Anti-Diuretic Hormone (ADH) to encourage increased water loss by expelling urine from the body. After a couple of days of increased water intake we began to taper off the amount Jordan was drinking, roughly by half each day until he ended up on just 500ml the day before his weigh in. By that time he was expelling more than he was taking on through increased urination, sweat and moisture in his breath. This works because it takes the body time to realise that you are no longer over-hydrating and to increase the levels of ADH in the blood so that you begin to retain more water.

Water loading combined with manipulating his carbohydrate intake was even more effective. Because I had a good idea of what his maintenance calories were and the macronutrient ratio he was on it was quite simple to adjust to elicit the significant weight loss. Carbohydrates are stored in the body as polysaccharides called glycogen. Because of the volume and intensity of Muay Thai the primary fuel source during training and fights is glycogen. Usually it would be optimal to refuel with a post training meal containing primarily protein and carbohydrates at a ratio of 1g of protein to 4g of carbs. But because we were trying to get Jordan to drop weight we wanted to limit the amount of carbs he was taking back on after training. I wanted to taper off his carbohydrate intake over the course of the week so that his training and recovery didn’t suffer more than it had to. As his sessions were still 2 hours each, twice per day it would have negatively affected his training if we had cut them out altogether. So our approach was to drop slightly to 200g 6 days out from the weigh in split over his two post training meals. Then every day after that we would half the amount until we reached Friday, the day before weigh in, when he would have zero starchy carbs. Jordan would have his last intense session on Wednesday evening which allowed us to drop his carb intake very low without to much negative impact on him on the Thursday. I should note now that while we did drop his carbs, we kept his green veg intake very high to supply him with vitamins and minerals he would need to help him recover. The carbs he was having came mainly from starchy sources like white rice which are more effective at topping up depleted muscles quickly post exercise. Dropping his carbohydrates this low would inevitably leave him in a rather large calorie deficit. To compensate for this I increased his fat intake so that, by my calculations, he was still at maintenance.

Combining water loading and carb manipulation is so effective because for every gram of glycogen that the body loses through exercise it also sheds 4 grams of water. So we can start to see how the factors of loss of water through increased urination combined with gradually depleting the body of carbs can result in significant weight loss. Throw in with this a little sodium manipulation and it becomes clear how we could achieve the significant weight loss without using a sauna or sweat suit.

I didn’t want to drop his sodium intake too low to begin with because of its vital role in fluid balance and nervous system health. Sodium and other electrolytes are used by the body to push fluid where it is needed using a process called osmosis as water is drawn to these minerals (GCSE biology anyone? I don’t remember either). Up until the Monday before the fight he had been actively salting his meals with himalayan pink rock salt which has a far superior mineral content to iodised table salt. I had him stop salting his food 6 days out but attempted to replace the electrolytes he would lose from this by putting sliced lemon in his drinking water. This would provide him with a nice dose of potassium, vitamin c and a small amount of fibre as well. After his first two days of water loading I withdrew the citrus fruit from his drinking water so that he would continue to flush out stored electrolytes through his sweat and urine and take the water that it holds along with it. Normally I would try to avoid removing sodium from the diet but because of the short time frame and the fact we hadn’t had a chance to do a trial run, it was a necessary evil.

The day before weigh in would give us a good idea of how much weight Jordan would need to lose in the next 21 hours our so. He came in at 59.2 kg on the morning before which meant there was still a fair amount to shift. However I told him not to panic as we still had a couple more tools in the box. As a sauna was out of the question and running in a sweat suit can be incredibly taxing on an already depleted body I suggested that he don some jogging bottoms, a t-shirt and hoodie and go for a 20-30 minute walk in the morning and evening. This would allow him to sweat it out a bit which, because he was not replacing his fluids to a great extent, would result in further weight loss. The sweat would be soaked up by the clothes rather than condensing on the inside of a sweat suit and overall would be a slightly more pleasant experience.

Jordan was to finish his last 500ml of water by 6pm and basically not take on any more until the weigh in at 3pm the following day, he would just sip to thirst to avoid cotton mouth. Because of the knock on effect of the water loading he would still be expelling urine which would contribute to his overall weight loss. Obviously going without water for that length of time is not terribly good for you, however because we used advanced rehydration and refuelling techniques immediately after his weigh in we could get away with it.

So after a late flight up to Bangkok from Phuket we managed to find a minibus that would haul us down to Pattaya, a two hour journey. Jordan was continually losing water weight as well as using up stored glycogen to keep him functioning and after a ropey nights sleep we got the scales out to see where we were. He was hovering around 57.1/57.2kg when he first got up and I suggested to him he keep 100ml of water handy and just sip to thirst. But Jordan, being the warrior that he is, refused and instead just rinsed his mouth out with water from time to time to prevent cotton mouth. One final check on the scales before we left to get everyone weighed in and he was bang on 57kg whilst in his boxers.

Upon arrival at the stadium there was the usual hanging around whilst everyone gathered and had their medicals. After about an hour of waiting our team weighed in. They were all asked to wear the official shorts they would be wearing for the fight the following night and that tipped the scales so that Jordan finally came in at 57.1kg. Even though it would have been nice for him to land on 57kg we were both over the moon with how it had gone. He was deemed fit to fight and immediately began rehydrating and refuelling.

In the final part of this blog series find out how we got Jordan back up to 62kg for his fight using advanced rehydration and refuelling techniques.

Find the final part in the series here 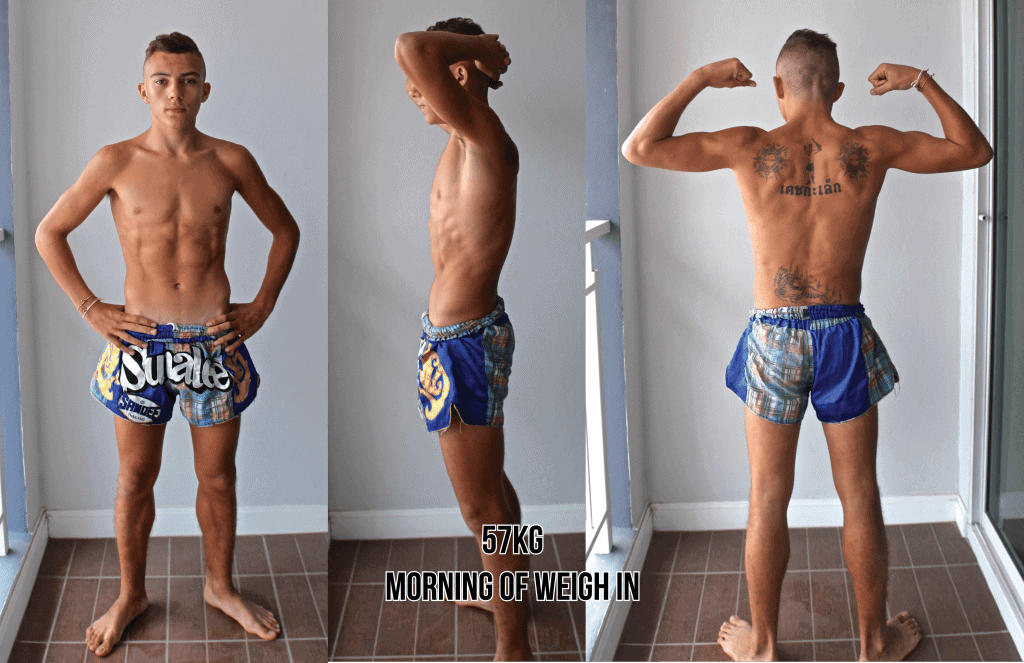