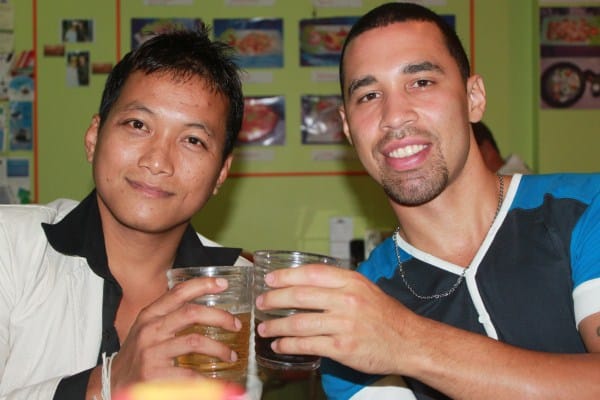 Chris is from New York City and works for the Police Department.  He was previously in the Marines.  His career so far has meant that he has had to keep himself in shape and he regularly trains Muay Thai at home in the States as well.  He came to Sumalee Boxing Gym, our Muay Thai Training Camp in Phuket, on the recommendation of a friend.

Although he is 33 years old, our Body Composition analysis during Chris’s early days at the camp showed he had a metabolic age of a 24 year old.  This was good news in itself.  However, two weeks on from his first measurements, Chris reduced his metabolic age even further down to 21 years old.  In terms of change in body composition, Chis was rewarded handsomely for the hard work and effort he put in at the camp.

Now with a Body Mass Index of 23.4 and a Metabolic Age of 21, Chris feels. his time at the camp has been very rewarding on all fronts.  He admits to having been apprehensive about travelling to Thailand alone but left feeling it was one of the best decisions he had ever made.  He says he will definitely be returning to Sumalee Boxing Gym within the next year, bringing a group of friends with him.

Whilst he was at the gym, he also took advantage of our media services.  This video charts his training progress.