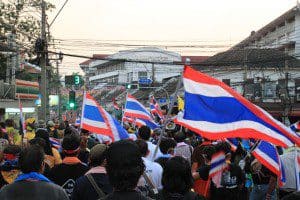 The week beginning the 2nd December was as saturated with the kinds of diversion as any self-respecting man could hope for. Between egging on rioters and fighting on national television for the King’s Birthday celebration, we paid a visit to the Lumpini for its final Championship Tuesday promotion.

Rambuttri Rd., where we stayed and which runs parallel to Khao San Rd., turned out to be more quaint and bohemian than one would expect. Ageing hippies mingled in the glow of the fairy lights, sipping mocha-lattes and discussing the state of their own travels, half-listening to Thai renditions of The Eagles. 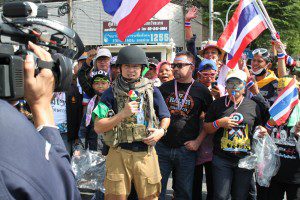 Bangkok’s volatile political scene had, however, boiled over once more as protesters attempted to break into the Police HQ ahead of the King’s birthday. Declaiming corruption in office, their ire was directed toward billionaire businessman and former leader Thaksin Shinawattra. Indicted in his absence, now in exile, his sister (currently in power) recently signed an amnesty bill to allow his return to office. I knew none of this at the time, but well organised protesters driving JCB trucks at police barricades have the tendency to capture my imagination.

Bizarrely, as evening approached, having achieved a lot less than they were cheering about, the rally simply and rapidly dissolved. The dissidents (of whom there were now several thousands) walked in a giant triumphal procession, through streets lined with elderly flag-waving supporters, directly past police lines – some of the black-clad riot cops even waved back. The two kilometres back to latte-sipping Rambuttri took a while in the thronging crowd, and I couldn’t help feeling as though I’d missed something!

Tuesday night saw us rubbing shoulders with the current legends of Lumpini Stadium- tickets a steal at a mere four thousand baht per person. Oron’s characteristic audacity gave us the chance to see these (invariably small) men in the flesh. Glancing over my shoulder as I strolled around back-stage, again I was struck by the sensation of having slipped through the net. That’s Pakorn; he’s Saenchai. I managed to get some pretty nice close-ups from virtually in the ring; the Caucasian male with the camera being beyond reproach to the average Thai security guard.

It wasn’t long into the night before Oron, with unmatched timing, fell over the ropes in celebration of a win by a fellow fighter from Ubon Ratchathani. Witnessing this characteristic ‘blunder’ being perpetrated upon the Lumpini, the unwitting participants in an internal joke, I felt nothing but pride. The bemused faces of a thousand spectators consulted one another over its meaning; elation at the very pinnacle of the jest etched on Oron’s own flushed features, the tumble taken invariably for his own amusement. 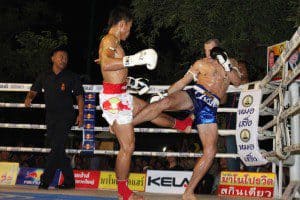 Day three (and the real reason we were there), the King’s Birthday Competition. Given the opportunity to fight live on Channel 7 against Jos Mendonca of Ingram Gym, a Rajadamnern Champion, we dumped the opponent I had originally been matched with under the premise of superlative exposure. Canadian technician Sean (Sor Sumalee) Kearney, protege of Lamnamoon Sor Sumalee, faced off against animalistic Singmanee Kaewsamrit for the chance to win a WMC belt. Singmanee’s barrage of low-kicks eventually took their toll, but not before Sean could make an impact with his own straight punches and long knees. 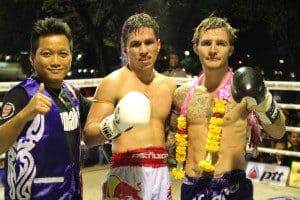 It is a strange phenomenon that even defeat, so long as on the world stage, can bring more of a sense of accomplishment than victory in the local arena. To be the small fish in the big pond is to accept the humility of endeavour; for the fighter, obscurity is the real enemy. From these contacts Sumalee has managed to secure its first appearance in Thai Fight, through me. This is the culmination of five years of toil and a number of false starts. Eventually, with a little stoicism and on merit alone, we have achieved a worthy and highly symbolic goal.

I started this journey on a whim and with great uncertainty. The opportunities that I am now being given, as the gym accrues both domestic and international, is the fruition of the whole Sumalee team’s professionalism. Sumalee has given me a documentary experience at the maturation of my career. Everyone is involved in the direct preparation for the fights, making contacts, the marketing and the promotion – for all the fighters at the gym. This growing network of contacts, and the dedication of those involved in building it, is allowing me to maintain a uniquely stimulating and rewarding lifestyle. The fight is only the last point in weeks of preparation, and indeed negotiation, to which every member of the Sumalee team is dedicated. 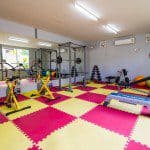 The Sumalee Studio is at full strength!