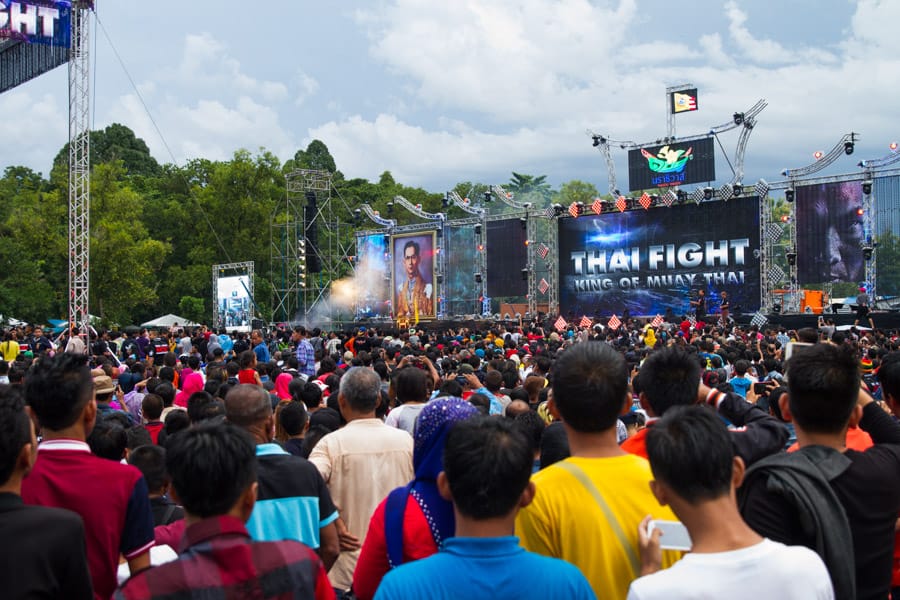 When Thai Fight contacted Sumalee Boxing Gym and asked us to take a fighter to their show in Narathiwat in the Thai Southern Provinces, we saw it as a good opportunity to showcase our fighter.   We had all heard of the troubles in the Thai Southern Provinces and of our own Foreign Office’s advice not to go there unless the journey was necessary. In consequence, we accepted the fight with a certain amount of trepidation.

Provinces in Thailand pay to have the Thai Fight promotion held in their area for a number of reasons.  Senior government officials in Narithiwat Province had requested that Thai Fight be staged there in order to instill confidence in the region as a safe destination to visit. Although quite a few people suggested that I should not go, my feeling was that if I was prepared to send my staff and my fighter I should be prepared to go there myself.

Concerns over the trip escalated somewhat when a bomb that killed and injured many people was detonated at the Erawan Shrine in Bangkok, a few days before the planned trip. As no one had claimed responsibility for this act there was speculation that this might be related to the insurgency in the south of Thailand.

It was a long drive from Phuket to Narathiwat and despite setting off reasonably early in the morning we arrived in the region after dark. The extent of the trouble in the area was immediately apparent by the numerous military checkpoints, patrols and barricades. It was all very reminiscent of Belfast during the height of the problems in the 1960s and 70s. The fact that development between the towns in this area is sparse meant that it was extremely dark with little or no road lighting. It was easy to be unprepared for the many barricades and check points along the route. Nerves were on edge. Nevertheless, we arrived at the Imperial Hotel in Narathiwat safely. We were pleasantly surprised by the standard of hotel given that the town is likely to attract little or no tourism and business activity was apparently minimal.

Concerns about terrorism in the locality meant that most of the members of the Thai Fight entourage were reluctant to leave the hotel. There appeared to be little to do in the area anyway as the region is undeveloped for tourism and there is a heavy Muslim influence. As a result a feeling of camaraderie was fostered inside the hotel, similar to that found in a siege situation. On the day of the fight, the Thai Fight entourage had a military escort to the stadium. The feeling of danger was heightened by the number of police and military at the hotel from first thing in the morning. A bomb disposal squad was also present. Additionally five small incendiary devices had been found in the vicinity of the stadium the night before. This had been reported on the news and all the Thai’s were aware of the situation. 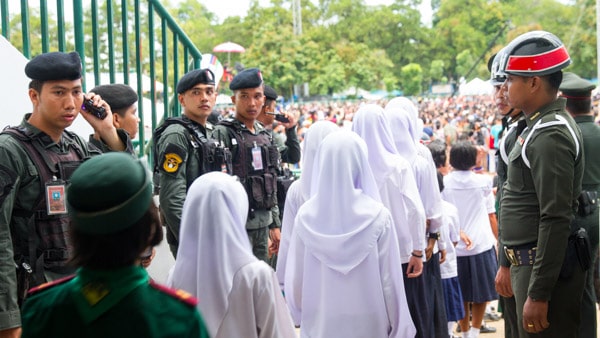 When we arrived at the stadium the security again was heavy. The military and the police were now being backed up by Special Forces (who incidentally were wearing t-shirts very similar to the Thai Fight ones with the name of their organization emblazoned on the collar, designed to be worn up). Helicopters patrolled constantly and there were more machine guns in evidence than I have ever seen before. Watching what was going on and understanding some of what was being relayed through walkie talkies, it was clear that the potential for some kind of terrorist attack was real. 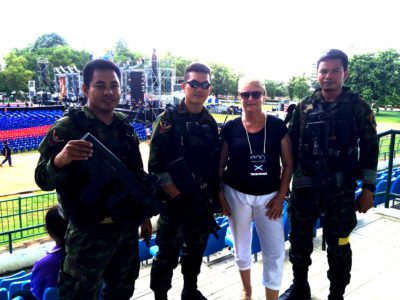 When they opened the gates at least two hours before the show started, the people of the province literally came flooding in. By the time the show started there were tens of thousands of spectators. I had plenty of time to kill before the fights started and was able to people watch for several hours. There was an overriding sense of expectation and joy amongst the crowd who were predominantly and clearly very poor. I cannot even begin to put an estimate on how many photos were taken before, during and after the show. So many mobile phones (mostly old and outdated models) were in operation that the local cell towers became overloaded and shut down for a while. 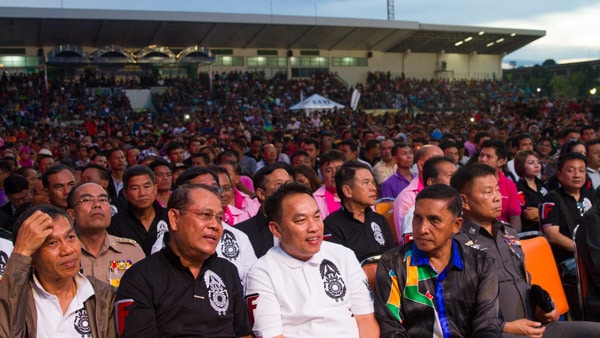 The Thai Fight show was more than likely the biggest event to have taken place in the province for a very long time and the people responded whole heartedly. They came out in their hoards, even though at the start of the event there was a heavy downpour with the most impressive lightning I have ever seen anywhere in Thailand (or indeed the world!). The crowd was buzzing throughout the whole of the evening. The fighters were their superstars for the night and they couldn’t get enough of them. This was clearly evidenced at the end of the evening when it was impossible to leave the stadium for several hours. Eventually all of the fighters had to leave the stadium under heavy escort in order to make their way through.

At the end of it all, despite a considerable amount of consternation about staging the event in the Southern Provinces, I couldn’t help but feel that as far as the local people were concerned the decision was inspired. It was a great gift to the local people. This Thai Fight was about a lot more than winning or losing. It was about giving something to a people who live from day to day under the threat of terrorism. The event gave them something to look forward to and a memory to cherish for a long time. I am sure it must have given them hope that there can be a normality.